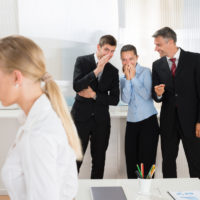 Parker v. Reema Consulting Services, Inc., Case No. 18-106, decided by the Fourth Circuit U.S. Court of Appeals on February 8, 2019, involved a female Virginia warehouse employee, Parker, who was promoted six times from low-level clerk to ultimately becoming the facility’s assistant operating manager.  Parker’s federal district court lawsuit alleged that about two weeks after her last promotion, she learned that certain male employees were circulating false rumors that Parker had engaged in a sexual relationship with a male manager in order to obtain her management position.  The rumor allegedly originated with a male who was hired at the same time and in the same position as Parker.  The suit claimed that because of Parker’s promotion Parker was now the employee’s superior, making him jealous of and hostile to Parker’s achievement.

The suit additionally alleged that the following occurred:

The warehouse’s highest-ranking manager participated in spreading the rumor. As the rumor spread, Parker was treated with resentment and disrespect by coworkers, including some she was responsible for supervising. The high-ranking manager locked Parker out of a staff meeting and slammed the door in her face. After hearing that the false rumor had been discussed at the staff meeting, Parker arranged a meeting with the manager. In that meeting, the manager blamed Parker for “bringing the situation to the workplace,” said that he had planned “great things” for Parker but could no longer recommend her for promotions because of the rumor, and “would not allow her to advance any further within the company,”When Parker met with the manager again several days later, he said he should have terminated Parker when she began “huffing and puffing about this BS rumor.”

Parker then filed a sexual harassment complaint with Human Resources against both the manager and the employee who originated the rumor. The employee in turn filed a complaint against Parker, claiming that she was creating a hostile work environment. Based on the employee’s complaint, Parker was instructed to have no contact with him. Supervisors, however, let the employee spend time in Parker’s work area talking to and distracting employees she managed. When Parker raised this with her supervisor and Human Resources, nothing was done, exacerbating Parker’s hostile work environment experience.

Then, Parker was called into a meeting with the high-ranking manager, Human Resources Manager, and company attorney. The manager simultaneously issued Parker two allegedly false written warnings and then fired her, failing to follow the company’s “three strikes” rule.

Parker’s federal district court suit claimed that she had been subjected to a hostile work environment and then terminated because of her sex.  The district court dismissed the claims, reasoning that the alleged creation and circulation of the rumor would not have been based on Parker’s gender, but rather based on the conduct alleged in the rumor, and that the same type of rumor could be made “in a variety of other context[s] involving people of the same gender or different genders alleged to have had some kid of sexual activity leading to a promotion.”  The district court also concluded that the alleged harassment of Parker was not severe or pervasive and therefore could not support a sex harassment claim.

The Court of Appeals reversed the district court’s decision and reinstated Parker’s sex discrimination claims.  The court found that Parker’s suit indeed stated a claim for sex discrimination because the alleged rumor implied “that Parker used her womanhood, rather than her merit, to obtain from a man, so seduced, a promotion.”  The court continued that Parker’s claims “plausibly invoked[d] a deeply rooted perception — one that unfortunately still persists — that generally women, not men, use sex to achieve success.  And with this double standard, women, but not men, are susceptible to being labelled as ‘sluts’ or worse, prostitutes selling their bodies for gain.”  Therefore, said the court, “traditional negative stereotypes regarding the relationship between the advancement of women in the workplace and their sexual behavior stubbornly persist in our society, and these stereotypes may cause superiors and coworkers to treat women in the workplace differently from men …”

Practice Pointer: Failing to discipline or terminate employees who are known to have spread rumors, true or false, about other employees is a serious mistake, opening the employer and employee up to liability for defamation and, if a rumor is based on gender, age, etc., liability for unlawful discrimination.  Members of management who fail to act on such knowledge should be disciplined or terminated.  Any member of management who originates or spreads rumors about an employee should be terminated.  No employer should take action against an employee based on a rumor unless the rumor is relevant to a legitimate business or employment concern, has been properly investigated, and based on the facts is a proper basis for discipline or discharge.

If you’re an employer in Tennessee or elsewhere facing an issue related to proper investigation and evaluation of rumored employee conduct, or any other complex employment issue, obtain professional and thorough legal assistance by contacting the Law Offices of Cary Schwimmer at 901-753-5537 or visiting our website at schwimmerfirm.com.  Our office address is 1661 International Place Drive, Suite 400, Memphis, TN 38120.