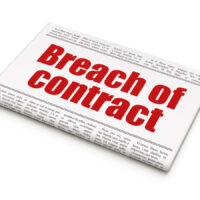 In Keller v Casteel, et. al, Case No. E2017-01020-SC-R11-CV (June 12, 2020), a municipal firefighter was terminated after pleading guilty to a criminal charge. While the lawsuit’s claim was violation of constitutional due process based on a property interest allegedly created by the City’s personnel manual, rather than breach of contract, the Court applied the same reasoning utilized in traditional contract claims based on employer personnel manuals and handbooks.

The Court reversed the trial court’s and Court of Appeals’ findings that the City’s manual created a constitutionally protected property interest. The Supreme Court noted that in Tennessee, employment is presumed to be at will. Relying on long-established Tennessee contract law, the court stated,

In the absence of specific language showing the employer’s intent to be contractually bound, such policies and procedures do not change employees’ at-will status and do not create a constitutionally protectable property interest. In this case, the municipality’s manual included an explicit statement that the municipality did not intend the procedures [in the handbook] to be binding or constitute any type of contract. Such disclaimers preclude any finding that the employer intended to be bound by the terms of the employee handbook.…

Under the employment-at-will doctrine, employment is for an indefinite period of time and may generally be terminated by either the employer or the employee at any time, for any reason, or for no reason at all … The long-standing rule in this State is that an employee-at-will may be discharged without breach of contract for good cause, bad cause or no cause at all, without being thereby guilty of legal wrong. … The employment-at-will doctrine “recognizes that employers need the freedom to make their own business judgments without interference from the courts.”

For an employee handbook to create legally binding contract,

Here, the handbook’s specific disclaimers of any intent to create a binding contract were very relevant material. The handbook included an explicit statement that the City did not intend for the procedures to be binding or constitute any type of contract and emphasized that “[a]ll employees are employed for an indefinite term.” Further, the City reserved the unilateral right to change or revise the manual’s procedures. Such reservation by the employer “generally would preclude the handbook from being considered part of the employment contract.”

To negate potential breach of contract claims based on their employee manuals, employers must include in their manuals the types of disclaimers and statements of employment-at-will status relied on in the Keller case. Also, employers should include such language in employee sign-off statements acknowledging receipt of the handbook, and in employment applications. The same should be stated in job offer letters unless the intent is to give the recipient an actual employment contract.

If you are an employer in Tennessee or elsewhere developing an employee handbook, or facing a breach of contract claim based on an employee handbook or other employer document or statement, obtain professional and thorough legal assistance by contacting the Law Offices of Cary Schwimmer at 901-753-5537 or visiting our website at schwimmerfirm.com. Our office address is 1661 International Place Drive, Suite 400, Memphis, TN 38120.