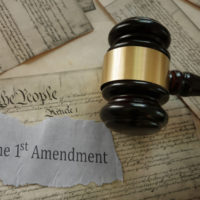 Tyler Chancellor had recently been hired to work for the kickboxing gym 9Round when he was invited to attend a special event by his employer. Chancellor, who is black, was seated with coworkers in the VIP section of the Camp Jordan Arena at a special event on Saturday, October 7, 2017. When the national anthem played in the arena, Chancellor decided to sit in protest. Chancellor later described having seen multiple other people across the arena remain seated during the anthem.

At the time of Chancellor’s act of protest, no one confronted him about his decision to remain seated. However, when he arrived at work that following Monday, he was terminated. Chancellor explained in an interview that the owner told him, “Because you sat down, you were part of a 9Round event, and you sat during the national anthem. We no longer want to continue business with you.” The gym’s owner explained that he was a supporter of the military and first responders and, as a result, found Chancellor’s actions disrespectful.

Tennessee is what’s known as an at-will state. Employers have the right under state law to fire workers for any reason; in fact, they need not have a reason at all. There are exceptions to this rule, however, including that workers may not be fired based on their race, religion, gender, or national origin.  But there is no right to free speech on the job under Tennessee employment law. An employee fired under similar circumstances could try to argue that, since the protest was related to racial issues, the termination was racially discriminatory.  However, without additional evidence that the termination was racially-motivated, proving such a claim would be challenging.

If you’re a Tennessee employer facing a complex issue related to a discrimination or wrongful termination claim, obtain professional and thorough legal assistance by contacting the Law Offices of Cary Schwimmer for a consultation, at 901-753-5537.