Speak No Evil (or Anything Else) About Current or Former Employees 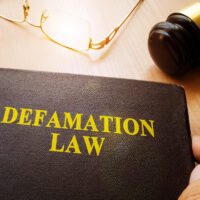 Supervisors and employees should know that saying things about the quality or conduct of a current or former employee can result in a defamation suit against the employer and/or the speaker if the speaker’s comments harm the person being asked about. Recently, in Wallace v. Leidos Innovations Corp. and Mantello, Case No. 19-5512 (March 27, 2020), the Sixth Circuit U.S. Court of Appeals, whose jurisdiction includes Tennessee, provided employers a valuable reminder on this important issue.

Mantello was employed in Tennessee by Leidos Innovations Corporation. Mantello allegedly defamed her former supervisor, Wallace, who had just accepted a new job with another company, by telling Wallace’s new company that he had sexually harassed Mantello and had “ethical issues.” The new employer then allegedly rescinded its job offer to Wallace as a result of Mantello’s comments.

The district court granted summary judgment for Leidos and the Sixth Circuit affirmed the decision. (The Sixth Circuit appeal involved only Leidos even though Wallace also had sued Mantello personally.) The question in the appeal was whether, even if Mantello’s alleged actions occurred, the claimed comments were outside the scope of her employment. If they were outside the scope of Mantello’s employment, Wallace could not invoke the legal doctrine of “respondeat superior” to impose liability on Leidos.

Reviewing Tennessee law, the Sixth Circuit stated that to hold an employer liable, a plaintiff must prove (1) an employee caused the injury, (2) that the employee was acting on the employer’s business, and (3) that the employee was acting within the scope of their employment. Here, Leidos was not liable because Mantello was not authorized to make the comments she was accused of, as shown by: (1) commenting to outside entities about a former employee’s performance were not the type functions Mantello was authorized to perform, which were pursuing new business and re-winning contracts, (2) Leidos had a human resources department to handle inquiries regarding former employees, and (3) Montello acted in her personal interest and disclaimed the employer’s interests when making her comments.

The costs of lawsuits and subsequent appeals are likely to be in the six figures, not to mention the cost of the time of employees required to be involved in the employer’s defense.  Employers can minimize the cost of a defamation claim, and perhaps avoid it entirely, by making it clear in handbooks and other relevant materials that no one other than Human Resources is authorized to comment to anyone about former employees, or to anyone about current employees unless business necessity requires an employee to make their comment to a fellow employee.

Human resources personnel should be advised in writing that (1) only specified Human Resources individuals are authorized to respond to inquires about current or former employees, (2) inquiries and responses should be in writing, preferably with a release from liability by the current or former employee, and (3) the employer’s response should include only dates of employment, last position held, and last rate of pay.

If you’re an employer in Tennessee or elsewhere faced with a defamation claim, obtain professional and thorough legal assistance by contacting the Law Offices of Cary Schwimmer at 901-753-5537 or visiting our website at schwimmerfirm.com. Our office address is 1661 International Place Drive, Suite 400, Memphis, TN 38120.