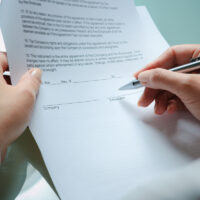 Employers sometimes present employees with a Hobson’s choice between signing a document, such as a non-compete agreement or arbitration agreement, or being fired. Does this amount to unlawful coercion rendering the document unenforceable, or a legitimate employment action? The Sixth Circuit U.S. Court of Appeals, whose jurisdiction includes Tennessee, recently addressed this issue in Solomon v. CARite Corporate LLC, et al., Case No. 20-1020 (November 23, 2020).

Solomon began working for CARite in September 2015. In June 2016 she was transferred to CARite’s Taylor, Michigan location. In July 2017 Solomon signed an arbitration agreement which required that any claim she might have against CARite, including any employment-related dispute, must be submitted to arbitration and not to a court. Solomon claimed that her supervisor told her that, if she didn’t sign, she would be terminated, and that, at the time she was asked to sign the agreement, she had very little time to review it because she was busy with her work activities. Solomon admitted, however, that she read through the document for five to ten minutes before signing it, that she possessed some post-secondary education, and that she had experience reviewing car-sales contracts, but she said that she did not understand the arbitration agreement or have the opportunity to consult a lawyer.

In August 2019, no longer working at CARite, Solomon filed an employment discrimination suit in federal district court against CARite and her former supervisor for sex discrimination and hostile work environment under U.S. and Michigan law, and against a former coworker for defamation under Michigan law. The defendants moved to dismiss the case based on the arbitration agreement and to compel arbitration of Solomon’s claims. In response, Solomon argued that the arbitration agreement was unenforceable because it lacked mutuality of obligation and because she did not knowingly and voluntarily waive her right to pursue claims in a judicial forum. The district court denied the defendants’ motion, finding that the agreement was unenforceable because the supervisor coerced Solomon into signing it because she was incapacitated by her fragile economic position and the supervisor’s threat to terminate her if she did not sign.

Applying Michigan contract law principles, the Court of Appeals rejected Solomon’s coercion argument, reversing the district court’s decision and compelling arbitration. The Court explained that under Michigan law, showing economic duress or coercion requires the plaintiff to demonstrate “that she was threatened with serious financial harm and that the defendant acted unlawfully.” …. Fear of financial ruin alone “’is insufficient to establish economic duress; it must also be established that the person applying the coercion acted unlawfully.’” …. All bargaining “’comes with implicit economic psychological pressures,’ but a belief that one has no choice in signing an agreement, ‘in view of the economic benefits offered and the risk of economic hardship if … declined,’ is an ‘accepted part of the bargaining process’ and not grounds to invalidate a contract.” When a party “threatens nothing which he has not a legal right to perform, there is no duress. . . Because CARite had a legal right to fire Solomon as an at-will employee”, conditioning her continued employment on signing the arbitration agreement was not unlawful and there was no coercion.

Requiring at-will employees to sign agreements which regulate or restrict what they can do in the future naturally may not be something they like. Nevertheless, such employer actions are part of doing business as times and business needs evolve. It is important that that Human Resources, managers or supervisors presenting employees with the requirement to sign documents like non-compete agreements, arbitration agreements and employee handbooks, not attempt to minimize employee concerns by saying such things as that the document is unlikely ever to be enforced or interpreting the document for the employee.

If you’re an employer in Tennessee or elsewhere faced with requiring employees to sign agreements they may not like, or with other employment contractual issues, obtain professional and thorough legal assistance by contacting the Law Offices of Cary Schwimmer at 901-753-5537 or visiting our website at schwimmerfirm.com. Our office address is 1661 International Place Drive, Suite 400, Memphis, TN 38120