A Reminder about Retaliation 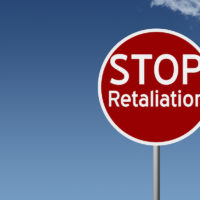 Every anti-discrimination statute contains a provision prohibiting the employer from retaliating against an employee for making an internal complaint of discrimination, filing a discrimination charge with the federal Equal Employment Opportunity Commission (EEOC) or similar state or local agency, or testifying, assisting or otherwise participating in an agency or employer investigation, proceeding, or hearing regarding a discrimination claim.  Since 2009, the largest percentage of EEOC charges have been retaliation claims.  In fiscal year 2018, 39,469 retaliation charges were filed with the EEOC, constituting 51.6% of all charges filed with the agency.

It is not uncommon for an agency, court or jury to conclude that an employee’s initial discrimination claim was without merit, but then find that after the claim was made the employer unlawfully retaliated against the employee or another employee who participated in events related to the claim.  Therefore, it is worth reviewing the basic legal rules applied in analyzing retaliation cases.

The Sixth Circuit U.S. Court of Appeals, whose jurisdiction includes Tennessee, most recently outlined these standards in Redlin v. Grosse Pointe Public School System, Case No. 18-1641 (April 16, 2019), where the court overturned the district court’s dismissal of the plaintiff’s retaliation claim.  Key points set out in Redlin and other Sixth Circuit decisions as well as in the EEOC’s regulations include the following:

A “materially adverse” employment action does not have to be something as drastic as termination, demotion, or denial of promotion.  The only test is whether the employer’s action might have dissuaded a reasonable employee from making or supporting a claim of discrimination.  The Sixth Circuit has found materially adverse employment actions to include denial of training opportunities, being placed on a paid brief administrative leave and a performance improvement plan, being referred to a fitness-for-duty exam and escorted out of the office, selective enforcement of policies with harsher punishment than for coworkers, and frivolous investigations.  The EEOC’s regulations include such examples as disparaging the employee to others, threatening reassignment, unduly scrutinizing work or attendance, workplace surveillance, and threatening deportation.

The “causal connection” element can be proved simply by the closeness in time or “temporal proximity” between the employee’s protected activity and the materially adverse employment action.  The Sixth Circuit has held that even a two-to-three-month time lapse between a plaintiff’s protected activity and the material adverse action is sufficient to satisfy a prima facie case of retaliation.

Where an employee who has made or participated in a discrimination claim is still working for the accused employer, members of management, especially those supervising the employee, are in very sensitive territory regarding potential claims of retaliation.  It is understandable that the employee may be prone to interpret a justified employer action as unlawful retaliation.  Yet the employer must be able to run its business.  Therefore, any potential action adverse to the employee should be reviewed for correctness by Human Resources and other appropriate management personnel as well as employment counsel before being taken, but still implemented if justified.

The issue of closeness in time between an employee’s protected activity and materially adverse action against the employee can be a conundrum for the employer.  Discharging an employee the day after the employer receives the employee’s EEOC charge obviously is dangerous.  On the other hand, waiting for significant time to pass before taking an action to avoid an appearance of a causal connection to the charge risks the appearance that the action is pretextual because nothing was done at the time the underlying facts were learned.  The best approach is to have the basis for any adverse action well-documented as soon as the facts are known, be sure there is no mention of the employee’s protected activity or inclusion of that activity in the decision process, and again, consult with employment counsel before taking any action against the employee.

If you’re an employer in Tennessee or elsewhere facing a discrimination or retaliation claim, obtain professional and thorough legal assistance by contacting the Law Offices of Cary Schwimmer at 901-753-5537 or visiting our website at schwimmerfirm.com.  Our office address is 1661 International Place Drive, Suite 400, Memphis, TN 38120.